And today, incredibly, we have the same gospel that once upon a time graced our wedding.

And now a story immortalized as the “sunrise of two hands”, in a scene so delicate and pregnant with meaning it could only be drawn by a dear friend. And wow, in metallic and copper! 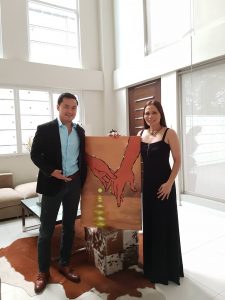 Here’s to Andrenee, and to all the romance that lies ahead! 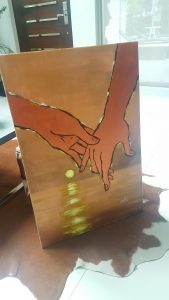 For the unabridged Love Story: Love Letter. Or here it is in full below.

A different love letter. To my wife, on our anniversary.

Written at dawn, on the shores of Tiberias, after all the hurt. 2,000 years ago.

This story holds a special place in my heart, the most romantic passage in the bible by far. Yes, it was the gospel in our wedding. But the story and context per se has always swept me off my feet, and touched me with a wholehearted belief in love that conquers all.

Context. It was the story immediately preceeding Jesus asking Peter 3x Do you love me? Which in turn is the last story across all the gospels Matthew, Mark, Luke and John. After this passage, John writes: Jesus did many other things as well. If every one of them were written down, I suppose even the whole world would not have room… And so ends the final verse of all the gospels – that Love is so infinite and eternal all the world cannot hold it.

And then the story. This is the first time Jesus sees Peter after his passion, death and resurrection – after Peter, his rock, had denied him 3x, abandoning him to die alone. Jesus could have been bitter and unrequieted, but what does he do? He extends his most intimate embrace by reminding Peter, who does not yet recognize the risen Jesus, that here in Tiberias was where he first first invited Simon and the apostles to be fishers of men. Jesus reminds not by words, but by inviting them, after a futile night of fishing and catching nothing, to cast their nets again; as he had done when they first met, so now the futile nets were filled to the breaking. It was only then that they realized it was Jesus. Dominus Est, it is the Lord, they gasp. And afterward, Jesus prepared breakfast and broke bread with them again.

How wonderful it must have been to see again the one you love and hurt and lost embrace you, saying “Come, let us begin again”.

There are so many reasons why this story will always hold a place in my heart.

Because it is early morning, the sights and sounds and smell and touch of life – early morning is and will always be my favorite and most intimate time of day.

Because it is casting nets at sea – the turbulence, the highs and lows, the never ending struggle, the failures and futility, the despondence, knowing one is lost and broken and barren, knowing we have failed and abandoned again and again.

Because still and all He comes to us again and again, comes into our holes, our emptiness. Makes us bear fruit, restores us, invites us, feeds us, fills us, makes us whole again.

Because through so many ups and downs in the last 20 years, you and I have always come back to this story. Come, let us begin again.

And that is who you are to me, Love, the safe harbor I can always come home to.

Because in you, I can always say Dominus Est. It is the Lord, it is Love.