I’ve lived a lifetime and a half spoiled by an 8 year old boy and his itinerant storytelling. His gypsy touch brings me to frontier times and spaces I’ve never been or don’t usually enter. Wherever he is, a universe unfolds in his head; sometimes he writes it out and we are witness.

But the real gem in this one might be the back story. Something lit him that night on the long ride to dinner with friends. I was already in Makati for all day meetings so I missed the drive and can’t say for sure. I suspect he came across the nameless Hoyhoy along the traffic-littered way. Who knows if it was an individual Hoyhoy or (more likely) cumulative Hoyhoys that finally broke through. Maybe there was eye contact between hero and would be muse (that is what storytellers are, they lure the beauty in us), probably a lingering stalemate as so often happens waiting for the liberation of a green light. That nagging then numbing eternity on both sides, and then traffic and life move on.

Only this time, one side blinked and entered the world of the other. In there one 8 year old boy gazed into the window of the other 8 year old boy, heard his voice, measured his character, grasped the essence of his thread not in pity but in fear, struggle, recognition and all that formerly distanced now shared humanity – and then and there something dissolved, from anonymity and walls into the identity and (dare I say) friendship of one called Hoyhoy. A more beautifully named protagonist I have not met; who so perfectly carries the lightness of being when omnipresent anonymity is suddenly intimately encountered. Beautiful, beautiful, beautiful Hoyhoy. It belies the broken Tagalog – right there the 8 year old nailed the native tongue more than I ever have.

And so over dinner that night, while we adults ate, drank and merried, this 8 year old boy wrote another chapter into eternity. Sheila asked how does the story end? I don’t know and I don’t think the author-muse knows. The best stories never end, they just write themselves in God’s good time.

You see, Revelation is not the last book of the Bible. Revalation is alive today, in the people who enter our lives and whose lives we enter. Here, there, everywhere the Lord speaks. 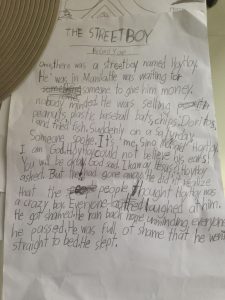