Always good to hang with one of my heroes. Teddy Roosevelt – statesman, adventurer, outdoorsman, author, conservationist, trust buster, visionary, warrior and priest – didn’t so much inspire as he reassured me that desiring, demanding and daring mighty things was neither crazy nor vain.

Here in the 4 walls of his Museum of Natural History are TR’s admonitions on Nature, Youth, Manhood and State – of which my favorite is his counsel to youth, words I would readily say to my boys. 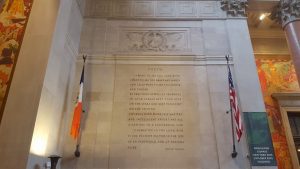 And here is one of my all-time favorites, TR’s call to Carpe Diem.

Far better it is to dare mighty things, to win glorious triumphs even though checkered by failure, than to rank with those timid spirits who neither enjoy nor suffer much because they live in the gray twilight that knows neither victory nor defeat.

It is not the critic who counts; nor the one who points out how the strong person stumbled, or where the doer of a deed could have done better.

The credit belongs to the person who is actually in the arena; whose face is marred by dust and sweat and blood, who strives valiantly; who errs and comes short again and again, because there is no effort without error and shortcoming; who does actually strive to do deeds; who knows the great enthusiasms, the great devotion, spends oneself in a worthy cause; who at the best knows in the end the triumph of high achievement; and who at worst, if he or she fails, at least fails while daring greatly.