Look who paid us a visit this morning. Acrylic on canvass don’t show them, but happy faces do. 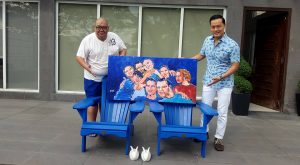 Two loaves and five fish and who would have thought it was enough to feed four thousand, the multitude made manifest in our lives in who else but family and friends. No matter how small or limited we might feel about our gifts, they are always more than enough for the joy and peace we are asked to feed the people in our lives.

My Grace Is Sufficient.

So, what is your two loaves and five fish? What is your Abundance? And who are the multitude you are asked to feed?

Thank you for this Collaboration in Abundance, Yeyey!

What Is Your Abundance
Acrylic on Canvas
Yeyey Yatco, 2017
#yatcoart

***
Jesus called his disciples to him and said, “I have compassion for these people; they have already been with me three days and have nothing to eat. I do not want to send them away hungry, or they may collapse on the way.”

His disciples answered, “Where could we get enough bread in this remote place to feed such a crowd?”

“How many loaves do you have?” Jesus asked.

He told the crowd to sit down on the ground. Then he took the seven loaves and the fish, and when he had given thanks, he broke them and gave them to the disciples, and they in turn to the people. They all ate and were satisfied. Afterward the disciples picked up seven basketfuls of broken pieces that were left over. The number of those who ate was four thousand men, besides women and children.